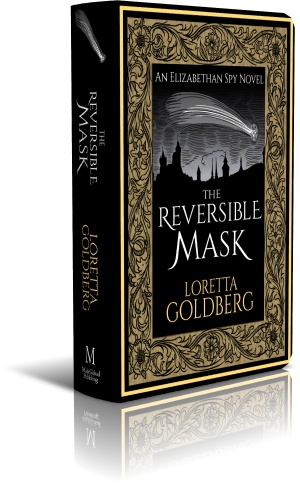 Conflicting passions—patriotism and religion—wage war in his heart. On this day, religion wins. Sir Edward Latham throws away his title, kin, and country to serve Catholic monarchs abroad.

But his wandering doesn’t quiet his soul, and when Europe’s religious wars threaten his beloved England and his family, patriotism prevails. Latham switches sides and becomes a double agent for Queen Elizabeth. Life turns complicated and dangerous as he balances protecting country and queen, while entreating both sides for peace.

Available from Amazon and all good book stores
CLICK HERE

I have to say straight out: Loretta Goldberg’s The Reversible Mask is one of the best-written books I’ve read for a very long time. It’s billed as a historical mystery but it’s much more than that, the journey of a soul in troubled times. Edward Latham is a Catholic at the court of Queen Elizabeth I but, unable to reconcile his beliefs with his service at court, he flees to Scotland to offer his service to (Catholic) Queen Mary. But Scotland is as unstable as England is unsafe and it’s only the beginning of Edward’s adventures. As he careers around Europe in the service of various Catholic powers we learn about his life and his loves, his good side and his bad. The portrayal of the battles between his heart and his head, his faith versus his inherent allegiance to his country, all make for a sensitive and, in the end, compelling portrayal. 4/5

"This is my first Loretta Goldberg novel, and it is a winner.  In fact, it is Loretta’s debut novel.  The reader is transported back to the summer of 1566 introducing us to  Elizabeth I’s Protestant government.  The story encompasses religion and patriotism and Europe’s religious wars.  This is a wonderful way to learn about history and the past, by being introduced to characters that not only burst off the page, but ignite our imaginations.  If you are interested in the way of the “royals”, “The Reversible Mask’ is a must read for you.  We shall enjoy this book for now and wait anxiously for another historical tale from Loretta Goldberg."

"The book has some amazing battle sequences, especially the battle of St. Ghislain. The descriptions of fire boats (boats loaded with gunpowder and sailed into naval battles, then blown up) and flyboats (fast freshwater ships adapted for naval warfare) give the reader a better understanding of the Armada battle tactics."

"Her story shimmers with the detailed specificity of, say, Proust’s A Remembrance of Things Past, while its roots bring to mind the embedded sensuality that drives Gabriel Garcia Marquez’ One Hundred Years of Solitude. Goldberg’s protagonist, Edward Latham, a dashing Elizabethan double agent, personifies the nerve-tingling tension between passionate patriotism and a tormented Catholic conscience. For all its scholarship this tale of derring-do rollicks along at a terrific pace."

“…The Reversible Mask held me from start to finish. I loved the span and scope balanced with the individual rhythm of each character. You weaved a story so engrossing that I’m feeling a touch of mourning now that I’ve finished. Thank you for this novel.”

“This is a glorious novel! Rich in detail and atmosphere, jewel-like in its creation of Elizabethan England, it’s the best kind of historical fiction, transporting readers to a captivating time and place and story. Goldberg does a magnificent job of conveying the intrigue, passion and sometimes sheer sumptuousness of Elizabeth I’s  court and politics. I loved it.”

Jeanne Mackin award winning author of fiction and non-fiction. (The Beautiful American; forthcoming A Lady of Good Family; Dreams of Empire; The Queen’s War; The Sweet By and By; and The Frenchwoman. Penguin, St. Martin’s Press.) Rochester, NY October 3, 2018

“Goldberg has created a richly detailed world, brought to life with a brilliant cast of engaging characters. The Reversible Mask is a true delight.”