Welcome Gray, thanks for visiting my blog!

You have published in the mystery, historical fiction and thriller genres. How do you build characters for the different pacing of these genres?

Plotting, pacing, and characterization are necessary skills for all long-form prose.  Each manuscript requires maximum attention to those all-important 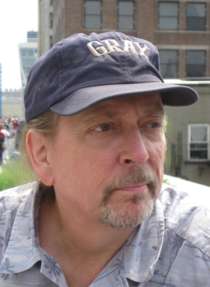 considerations.  Mystery and thriller genres, of course, are different in that building general suspense is paramount.  As you build suspense, you can also build character and plot; as you build character and plot, you can also build suspense.  It’s a slow process that requires great patience as a writer and utmost willingness to rewrite, rewrite, rewrite.

In mysteries/thrillers, readers are ready to accept a general concept of the “good guy” and the “bad guy.”  Still, it’s important to draw them as realistically as possible, just as when writing in other genres.  All stories, including literary fiction, involve characters that must overcome adversity and typically each of them is coping with forces beyond their control.  In mysteries/thrillers, those forces can be drawn more broadly, but it’s best if the readers connect with the characters as real people so they may experience the story with honest emotion.  When that happens, it’s wonderful.  Think: “The Talented Mr. Ripley,” by P. Highsmith.  Where that doesn’t happen, thinly drawn characters will only worsen an overly broad storyline.  Think (despite commercial success): “The Da Vinci Code” by D. Brown.

My latest novel “Flight of the Fox” was a test to see if I could write a thriller in the contemporary style, complete with adventure, violence, suspense, et. al.  The way I got there was to focus first on character and I decided to create an everyman hero as an alternative to the many karate-chopping, gun-slinging, fast-car driving characters that abound.  I started with my protagonist, Sam Teagarden, who is a math professor who recently lost his wife in a car crash which also left him with two broken knees.  Then I gave him a full backstory.  He was born during the Woodstock rock festival in 1969, loves classic rock, once worked for the CIA in the encryption/decryption department in a boring job that he hated and quit after less than one year.  Before I committed the first words I knew my protagonist well enough to feel confident that—he—at least would be sufficiently real to begin the process of building believability for the reader.  That’s when I was ready for the suspense to kick in, and ready for him to use his natural intelligence and math skills as his only weapons to try to outsmart the bad guys (who had many high-tech weapons at their disposal).

As for historical fiction, it’s important to know the period as though you were living in it.  Once a comfort level is achieved with the era, you must write with great familiarity as though that era were the present or not-too-distant past.

Additionally, for my Civil War historical, “Shadows in the Fire,” I utilized a 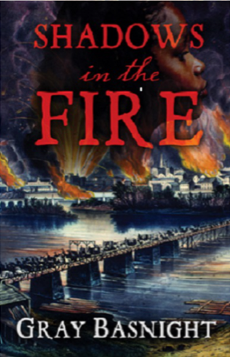 character naming technique.  Each surname was chosen from the long list of Confederate generals killed during the war.  My intent was to use names that I hoped would resonate with the reader as possessing a legitimacy unique to the period.  I couldn’t use the two most familiar names, Jackson and Stuart because of their fame (or infamy).  But all other lesser known officers were fair game.  Thus, the principals are named are Pegram, Pettigrew, Winder, and Zollicoffer.

Here, my central protag, Miss Francine Pegram, is a twelve-year-old slave girl, so my task was to build suspense through her eyes.  To me, warfare through the eyes of a child is more compelling than the same story through the eyes of a soldier.  Additionally, I made this choice to utilize what I thought would be maximum vulnerability.  She’s a slave, a child, and a female.  I felt that would help build suspense and increase sympathy on the part of the reader.

Has your broad-based career in broadcasting affected your writing in these novels?

Yes.  The impact of working in broadcast newsrooms has been quite helpful.  First, well-written broadcast news copy is tight and terse, short sentences with highly active verbs.  Secondly, all journalistic writing focuses on the most important facts.  Depending on time, they’re followed by the secondary and tertiary facts.  That doesn’t always work for prose but knowing when and where it’s effective is quite helpful.  For me, the trick is to utilize the classic rules of journalistic writing, but to also establish my own prosaic style.

I endeavored to do this for my first novel “The Cop with the Pink Pistol.”  It was a crime and romance story, essentially drawn from a police blotter.  I took the basic crime, a routine burglary, as it may be heard in a newscast, and expanded on that to include people with personal goals and aspirations who must suddenly cope with an unpleasant event while simultaneously getting on with their lives.

I also used a bit of a news technique to advance scenes in “Flight of the Fox” by writing in short chapters.  Secondly, when the decoded diary is finally revealed, it becomes a news story within the wider novel.  And when the diary is then made public, the impact that news story has on public morale is central to the novel’s ending because it changes understanding of American history.