Buckley and Slonimsky were leading intellectuals of the twentieth century. Buckley was a conservative political theorist, author, TV anchor and editor of The National Review, while Slonimsky was a composer, conductor, pianist and prolific author who championed new music. I had the pleasure of meeting Slonimsky, who was a friend and fan of my piano coach, Hilde Somer.  Both men thought about rejection a lot, collecting examples that caught their fancies.

Buckley was also an avid sailor. Atlantic High is one of two acclaimed books 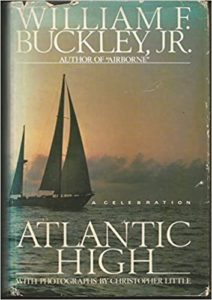 chronicling his sailing voyages across the Atlantic Ocean. He owned a boat, took on the business complexities of chartering it out, and made voyages with family and congenial friends. He scheduled evening dinners so that he could take the 8pm-midnight watch, and make navigation observations by the stars. At these dinners, conversation often turned to literature, and life as an editor with the duty of selection and power of rejection.  On page 195 he muses about how to craft a rejection letter that does its best not to wound. His favorite example is from Peking Publishing House, presumably before Mao’s ascendancy, returning a manuscript by a British economist writing:

“We have read your manuscript with boundless delight. If we were to publish your paper it would be impossible for us to publish any work of a lower standard. And, as it is unthinkable that in the next thousand years we shall see its equal, we are, to our regret, compelled to return your divine composition, and beg you a thousand times to overlook our short sight and timidity.”

For anyone who likes sailing, this book is a delicious read. Buckley’s prose is engaging, only occasionally fussy. His pacing is so sure-footed that even someone like me, who gets seasick and disagrees with Buckley’s politics, was seduced into loving this book, and the evident generosity of its author.

Lexicon of Musical Invective has always been one of my favorite books. It deserves a place of honor on the bookshelf of any creative artist. It’s a cry 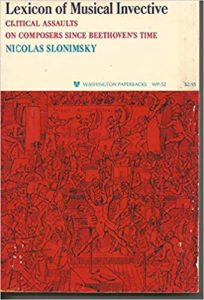 from the heart, couched in ruthless comedy, for an open mind toward innovation. Slonimsky searched newspapers and magazines for reviews of major composers from Beethoven to Rimsky Korsakov. And guess what he found? All were panned for screeching dissonance, ugliness and incomprehensibility. Major literati like George Bernard Shaw aren’t spared. They weren’t ahead of their time, plying their waspish wit against vulnerable composers we now revere. What’s instructive is that composers we think of today as easy to listen to, pushed auditory and sensibility boundaries when they wrote.

Chapters are organized by composer. But the book’s jewel is its index. To drive home his angry, pleading point, Slonimsky has  created an Invection, an index of abuse, with page citations for the composers indicted. Here are some entries: AGONIZED BRAVURA ON A POCKET HANDKERCHIEF:   Liszt; AMOROUS CAT (chromatic meows): Bizet; EUNUCH: Wagner; EXCREMENT: Schoenberg, Wagner; FIERCE WHISKERS STAINED WITH VODKA: Rimsky Korsakov. Catawauling has too many entries to name.

It is comforting that audience receptivity, like whiskey, matures over generations.