MICHELLE CAMERON talks about her new prize-winning novel Beyond the Ghetto Gates.

Welcome to my website. I am so happy you’ll be on our next HNS Published Writers series, June 30 at 6.00 pm, even if it is Zoom. Thank you. Michelle, at my high school we learned about Napoleon in Northern Europe, Spain, Egypt, Russia, and Wellington and Nelson. I grew up loving poor Beethoven in Vienna, who had to block his deteriorating ears against Napoleon’s bombardment as he wrote the Fifth Symphony. We learned nothing about Napoleon in Italy. When did you first become aware that he freed the Jewish ghettos? And how long did the openness last after his downfall?

Napoleon in Italy was a surprise to me, too! I think we must have had the same basic education about the Emperor, because that’s what I recall from my high school as well.

I first became aware of Napoleon’s campaign through Italy the same time I learned about his involvement with the Jewish ghettos – which was when I was reading Michael Goldfarb’s Emancipation: How Liberating Europe’s Jews from the Ghetto Led to Revolution and Renaissance. In it, Goldfarb not only described how new Enlightenment idea sweeping Europe made a difference to how the Jews of the continent and primarily France were regarded, but also included the scene in Ancona when Napoleon became aware of the Jewish isolation behind the locked gates of the ghetto.

Jewish emancipation in Italy did not last long after Bonaparte was defeated. One of Napoleon’s missions was to destroy the Pope’s control over his Italian territories, but once the Congress of Vienna did their best to turn the clock back on Europe and Pope Pius VII regained possession of his realms, he reinstated the Inquisition and sent the Jews back to the ghetto. It is interesting to note that ghettos survived in Italy until 1870, when the Papal states were finally dismantled.

1) Your novel is consummately plotted. I particularly admire the pacing with which you march your main characters along their individual roads to the intersection where they collide. It feels just right. Do you have a process? Use outlines? Or does structure come naturally to you?

That’s quite a compliment, thank you! I wish I could take credit for having a process that would have accomplished this the first time out. But while I use timelines and calendars to plot out and make sure I hit the main historic events of the novel, I had to revise this book multiple times to get my storyline right. In fact, I have never revised a book as often as I did this time around!

For instance, in the beginning the main characters didn’t meet until the day the ghetto gates were demolished. But thanks to suggestions from beta readers, I 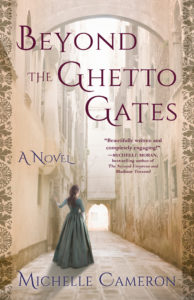 realized I had to introduce them earlier on so to avoid seeming like I was telling three separate stories. In the case of Mirelle and Francesca, the women who are the primary movers of the novel, this was fairly easy to accomplish. After all, they lived in the same town despite being separated by the ghetto gates. And Francesca would naturally sell her produce in the marketplace, so they could encounter one another by the end of chapter two. That initial meeting made the devoutly Catholic Francesca’s story line feel more organic.

In the case of Mirelle and the two French soldiers, Daniel and Christophe, making this happen was considerably more difficult. After all, despite the French military incursion into Italy beginning in 1796, the troops would only reach Ancona in early 1797. Mirelle being invited to Venice by her wealthy friend was a relatively late inclusion to the novel. But it allowed her to meet Christophe in a highly romantic setting, and their rescuing one another from awkward and then potentially dangerous situations could light the flame of their infatuation.

2) In your research, did you come across an event or person you ached to include, but omitted for the sake of form?

I had to omit a lot, less for the sake of form and more for length. My publisher wouldn’t publish a book that ran more than 120,000 words, and my original draft clocked in at 135,000. One episode that had to be cut in entirety was Napoleon’s sister, Pauline, caught being courted behind a screen in a less-than-discreet manner by French officer Victoire Leclerc. This took place when Pauline, together with Josephine and her children, joined Napoleon in Milan. Bonaparte arranged what we’d call a “shot-gun” wedding soon after surprising them. All regrettably edited out – it was so much fun to write!

In addition, several research “darlings” were cut. I worked hard to incorporate the French Revolutionary calendar and its overt elimination of the Jewish Shabbat and Christian Sunday observances. The 10-month year, 10-day week system was fascinating to me, but it only added peripherally to the story I was telling, and so it hit the cutting room floor.

3) What are you working on now?

My next novel revolves around another less-known episode of Napoleonic history – when Napoleon led an exhibition to Egypt and Israel, accompanied by more than 100 scholars from a variety of fields. This was his way of wounding the British without attacking them directly. The story will include Napoleon’s opportunistic, proto-Zionist approach to win over the Jews of Israel, which was rescinded when the French troops, already devastated by plague, lost to the Turks in Acre. Both Christophe and Daniel will take part in the campaign and Daniel and Mirelle will follow through on their promise to write to one another, giving me the opportunity to explore one of my favorite forms – the epistolary novel.

Bio: MICHELLE CAMERON is a director of The Writers Circle, an NJ-based organization that offers creative writing programs to children, teens, and adults. She is the author of works of historical fiction and poetry: Beyond the Ghetto Gates (She Writes Press, 2020), which won the Silver Medal for Historical Fiction by the Independent Publishers Book Awards (IPPYs), The Fruit of Her Hands: The Story of Shira of Ashkenaz (Pocket, 2009), and In the Shadow of the Globe (Lit Pot Press, 2003). Michelle lives in New Jersey with her husband and has two grown sons of whom she is inordinately proud. Visit her website at https://michelle-cameron.com.