“Persistence is the sworn enemy of opposition. Novelist, Loretta Goldberg, girts herself for battle- and wins the war. Her writing, in this exciting novel, The Reversible Mask, out in the Fall from the small boutique publisher, MadeGlobal 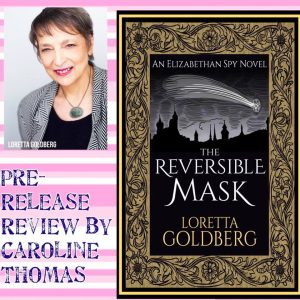 Publishing, is all thrills and chills. Her story shimmers with the detailed specificity of, say, Proust’s A Remembrance of Things Past, while its roots bring to mind the embedded sensuality that drives Gabriel Garcia Marquez’ One Hundred Years of Solitude. Goldberg’s protagonist, Edward Latham, a dashing Elizabethan double agent, personifies the nerve-tingling tension between passionate patriotism and a tormented Catholic conscience. For all its scholarship this tale of derring-do rollicks along at a terrific pace.
It’s like finding your grandmother’s diamonds stuffed in a neighbor’s drawer. There’s so much disagreement about the manner in which your neighbor might have acquired those pesky diamonds. Different possibilities arise from chapter to chapter. Then, Heh presto! A game change! The booty never actually belonged to your grandmother at all- a revelation which upends the entire story.
It’s all terrific fun- unless it’s absolutely horrifying, usually both simultaneously. And yet we’re quite willing to ‘get lost’ along with all the Queens, Kings, Generals, Sultans and just plain folk continually crossing and double-crossing each other. With Latham as its focus, the political liaisons and sharply diverging religious attitudes behave like pieces of an immense puzzle as they alternately form, reform and fall apart.
We feel we are part of of the action, as the story mirrors John le Carre’s best work. The vivid writing plunges us into the ‘undercover’ lives of that time, whether describing ‘secret trysts’- often between men- or writ large on a vast canvas of fastidiously researched battles. And furthermore, how we in our day, try to discredit or build upon the history of famous military figures. Vivid details are etched into this story of a very turbulent time- stuffed with love, sex, heart-breaks, betrayals, cowardice, heroism. It’s s a tale of actions taken, derring-do or gutlessness, annihilation or amelioration, and all their far-reaching reverberations. Human nature doesn’t change. A feeling that something akin to what happens in this most prescient novel is occurring in America right now. We are reminded of a time when the great Elizabethan Age is coming to a close. Oliver Cromwell is about to show up, darkening the horizon. In some ways, the tangled roots of this meticulously researched page-turner, are a reflection on Yeats’ poem The Second Coming. Subliminally, is it a cry from the heart urging us to gird ourselves for the huge danger we are facing in this country at this very moment. Let us hope that right now no ‘…rough beast, its hour come round at last, Slouches toward Bethlehem to be born.’
At the finish of this thoughtful page-turner we are not abandoned in total darkness. Is this glow a hint of the approaching dawn? Or are we witnessing a final twilight of the gods…”