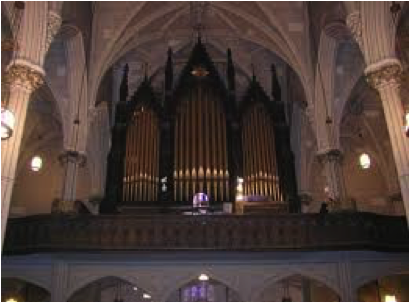 Dear Friends, I am not talking about me today! I want to share the deeply moving organ recital at Basilica of St. Patrick’s Old Cathedral on September 20. This cathedral hosts two nineteenth-century pipe organs. One is a small Hall and Labargh instrument of 1859, the other a large Erban organ of 1865. Erban was the most prolific organ builder of his day in America, supplying churches in Central and South America, Canada and many states in the US. The instrument in St. Patrick’s is unique in being the only one that had not been rebuilt. Both organs need restoration but are extraordinarily rich in colors 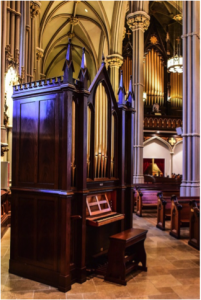 and power. Coincidentally, the manufacturer of the Hall and Labargh organ was Henry Erban’s teacher/mentor. They had a personal and professional falling out. Politics and egos–you can’t get away from them! I had a deliciously spooky time mentally writing tantrum, bad mouthing and sabotage scenes while waiting for the music to start. It brought back my days as an organist for the Reform Jewish High Holydays Services at a New York synagogue. On Rosh Hashana, our Day of Atonement, when I went to the bathroom between services, well-dressed women were rubbishing the cantor’s performance. Not even for a few hours could they put down their scalpels. I had been invisible behind a screen while accompanying, so they didn’t know who I was, took me for a like-minded congregant. Now, many years later, at St. Patrick’s, my sense of mingling sacred and mundane, even profane, was amplified by a scene outside. Through the window of a backstairs landing on the way to the basement bathroom, I saw a tiny enclosed garden, startlingly unkempt, with two lonely old grey chipped grave stones. The inscriptions were unreadable. Two black animals, a sheep and a goat, were nibbling weeds. Then back in the elegant nave, organist Renee Ann Loupette brought us back to high art. Her program ranged from Anonymous Venice 15th century 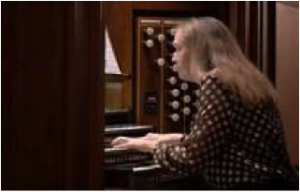 composers to the contemporary Pietro Yon. The finale was her transcription of Mozart’s Overture to Marriage of Figaro, a rambunctious headlong romp through the Erban organ’s full orchestral timbres. But what moved me most was one Anonymous composer whose piece showcased the Hall and Labargh organ’s flute settings. A short lyrical ricercare with interweaving contrapuntal lines, it stated a simple motif then sought out all its potential twists and dark harmonies. I can’t get it out of my mind. What a gift to posterity, this perfectly realized gem. And how vividly the indomitable human spirit conquers obscurity: millions of gifted Anons busy at cave paintings, poems, ballads, paintings and music, making our legacy.